Yesterday, I was reading through the “Let It Be” themed blog posts, and one really stuck out to me. Jen, over at Blood, Sweat & Carbs, wrote about the fear that so many parents have when raising a child with Type 1 diabetes. Jen’s words are real, and vivid, and I know something that every single parent of a child with diabetes thinks about, but never wants to admit. For some reason, Jen’s fear reminded me of a story that I haven’t thought about in awhile.

One morning in my early 20’s, I woke up all alone, in a strange bed, cold, in a room well lit with fluorescent lights, covered with nothing but a thin sheet, wearing only a pair of shorts, and staring at the clock on the wall above the door, trying my best to figure out when and where in the world I was. Turned out I was in the emergency room, having had a severe low blood sugar and seizure early that morning.

My dad would always call me in the mornings when he was working off the coast of Louisiana on oil rigs, and he later said that I had answered the call, but then he heard a crack and the phone went dead. The crack was my head hitting the kitchen floor. My girlfriend at the time heard the commotion, found me in the floor, and called 911.

After the ambulance ride and whatever the doctors did in the ER to get me back to good, my girlfriend and my college roommate finally invaded my room in the ER after having been told to wait in the lobby for a time. It wasn’t long before my mom and grandma, who lived an hour and a half away, also showed up. I remember being happy to tears that they were all there, and that I wasn’t alone anymore. Hospitals are scary when you’re that low. Heck, the entire world is scary when you’re that low.

It was still relatively early morning when I was discharged from the ER. I was starving, so we all went to McDonald’s to get breakfast. And who doesn’t love McDonald’s breakfast? No one. It’s awesome. Anyway…

While we were in line, a homeless man asked my mom if she could spare a few dollars so that he could get some breakfast. Thankful that I was okay, and in the spirit of blessings, my mom didn’t hesitate to give the man a bit of the cash for him to get himself some food with. The disheveled man promptly took the money and headed for the door, where his friend was waiting, so that they could most likely go buy themselves some booze instead.

Seeing this, my mom marched after him and grabbed him by the collar before he could get out the door and told him, “Now, I gave you money because you were hungry and wanted breakfast, and I just picked up my son from the hospital and we are thankful to be alive this morning. I didn’t give you money to go blow it on booze and cigarettes.” She then proceeded to walk the man to the counter at McDonald’s, as if he was a six year old boy, and made him order breakfast for him and his friend. Then she took her change back and sent them on their way with a paper bag full of hot McDonald’s goodness.

Back where me, my girlfriend, and my grandma were sitting, we couldn’t stop laughing at the spectacle of my mom making this bum unexpectedly order him and his friend breakfast. To this day, that story that started out so frightening still brings a smile to my face.

I don’t know why Jen’s post made me think of it. Maybe just to illustrate that diabetes is what it is, and it is going to throw a curveball in the direction of all of us at some point. The key is to be ready, and to be thankful for all the times that diabetes doesn’t win, which hopefully far outnumber the more fearful moments. Remember that, as a parent, it is your reaction to diabetes that your child will remember and learn to mimic, and will carry with them through life.

And also, never give a bum money at McDonald’s. Walk him to the counter and make him order breakfast instead. (Thanks Mom!) 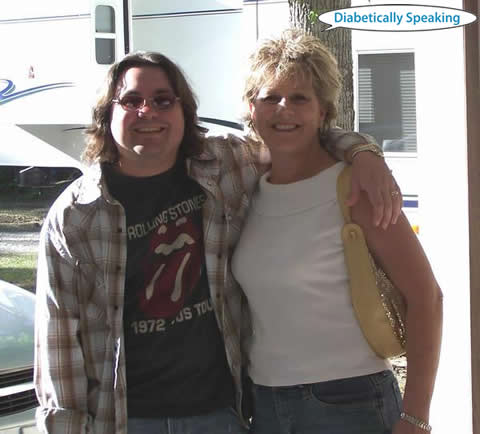